Geotechnical and metallurgical data from the drill core will be used to advance pit design and pursue smarter ore beneficiation strategies.

The company’s shares surged following the announcement, rising more than 16% to 3.6 cents.

The Victory Bore / Unaly Hill deposit has an inferred resource of 237 million tonnes at 0.43% vanadium pentoxide, 24.9% iron and 5.9% titanium dioxide.

This resource is equivalent to a contained 2.26 billion pounds of vanadium pentoxide. 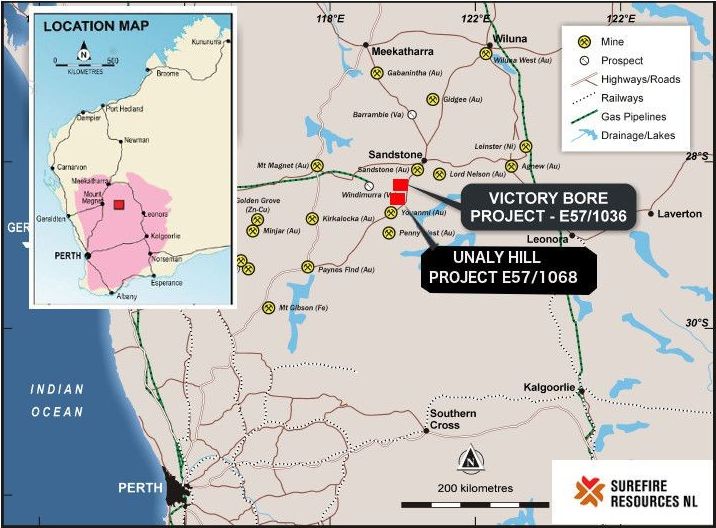 The Victory Bore Vanadium Deposit is located on E57/1036 which constitutes half of Surefire’s vanadium holdings in the area.

Surefire directors recently completed a field visit to the deposit to inspect the likely initial mining area and locate the proposed drilling sites.

The diamond drilling will be used to provide the core for geotechnical studies and follow-up metallurgical test work.

This data will underpin open pit design and to optimise the beneficiation flowsheet.

Battery metals like vanadium are taking the spotlight as the green energy revolution comes to the fore.

While VRFBs are, at present, more expensive up-front than lithium-ion batteries, they can work out cheaper on a full-cycle use over 20 years and 35,000 charge/discharge cycles.

What’s more, VRFBs don’t degrade over time, can discharge 100% of their stored power and the vanadium electrolyte is fully recyclable.

“The rise and then recent slowdown in China’s steelmaking have seen vanadium prices double since last year and retrace around 25%,” the report explained.

“New demand for high-grade vanadium is also starting to tighten the vanadium market. China has announced over 1,500 megawatt-hours of VRFB projects, which amount to more than 8,200 tonnes of vanadium.

“This equates to around 7% of the world’s vanadium demand, and roughly 30% of high-grade vanadium supply. In aggregate, similar plans are being finalised in Europe, Japan, Brazil and South Africa over the next couple of years.

“Clearly, there is need for more high-grade vanadium production that also meets sustainability credentials to assist the energy transition to lower emissions.”

Surefire Resources keen to explore 15+ gold and base metal targets...

Surefire Resources keen to explore 15+ gold and base metal targets at the...