The results reinforce Matador’s confidence in the consistency of an interpreted higher-grade plunging shoot at the core of the WGH mineral resource.

The results have exceeded the company’s expectations and reinforce Matador’s confidence in the consistency of an interpreted higher-grade plunging shoot at the core of the WGH mineral resource.

Gold mineralisation remains open to the south and south-west of the WGH-infill high-grade mineralisation intersected in CRD322, with CRD313 (WGHG-HSP) recording 0.9 metres at 13.2 g/t gold from 9.4 metres.

“CRD318 intersected multiple high-grade gold zones within two wide intervals of mineralisation consistent with our interpreted position of a higher-grade plunging shoot at the core of the WGH deposit.

“CRD322 is particularly encouraging as this hole was drilled to the south and on the periphery of this same high-grade shoot and surprised us with the quality of a 23-metre intercept grading 2.3 g/t gold.

“Gold mineralisation is open for at least 80 metres south and south-west of CRD322 presenting a high priority follow-up target that may eventually link up with the WGHG Margin target area identified through 2021 to the south-west.

“The first results from drill holes targeting a historic drilling gap, just west of the WGH Resource, at Heart Shaped Pond (WGHG-HSP) also delivered an encouraging high-grade gold intercept (CRD 313) that is open for at least 80 metres in all directions.” 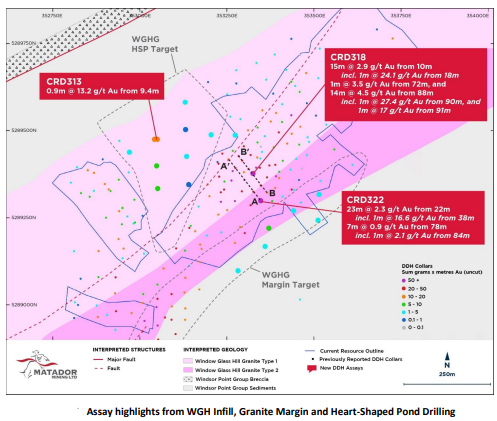 This domain hosts a higher frequency of mineralised veins, with infill drilling both confirming and extending the dimensions of this zone.

The positive results from CRD322  demonstrate the potential for this domain to extend further south than previously recognised and potentially link with the WGHG Granite margin target to the south-west.

Drilling south and west of CRD322 remains broadly spaced with further infill and extension drilling planned for the 2022 summer season.

Regular news flow is expected throughout the June 2022 quarter with winter drilling results as well as remaining 2021 power auger, till and geotech drilling assays.

Matador Mining brings on new leadership to propel gold projects into next...

Matador Mining Ltd (ASX:MZZ, OTCQX:MZZMF)'s Sam Pazuki details his first week on the job as the company's CEO and managing director. With Pazuki at the helm, the explorer is moving forward with plans to advance its Newfoundland gold portfolio. Activity will focus on both green and brownfields...

Mining Matador Mining expects a flurry of activity ahead of winter...

Mining Coffee with Samso: Matador Mining - The birth of a tier-1 gold miner