Modelling is underway to investigate potential open-cut and underground resource growth opportunities from the narrow but high-grade Disse system.

The ASX-lister reported on gold intersections from another 16 reverse circulation (RC) and three diamond drill holes at the asset’s Disse prospect.

Notably, all new results are below or outside the current mineral resource estimate and investors have responded strongly, pushing the share price as much as 20.9% higher intraday to A$0.11.

Modelling is underway to investigate potential open-cut and underground resource growth opportunities from the narrow but high-grade Disse system. 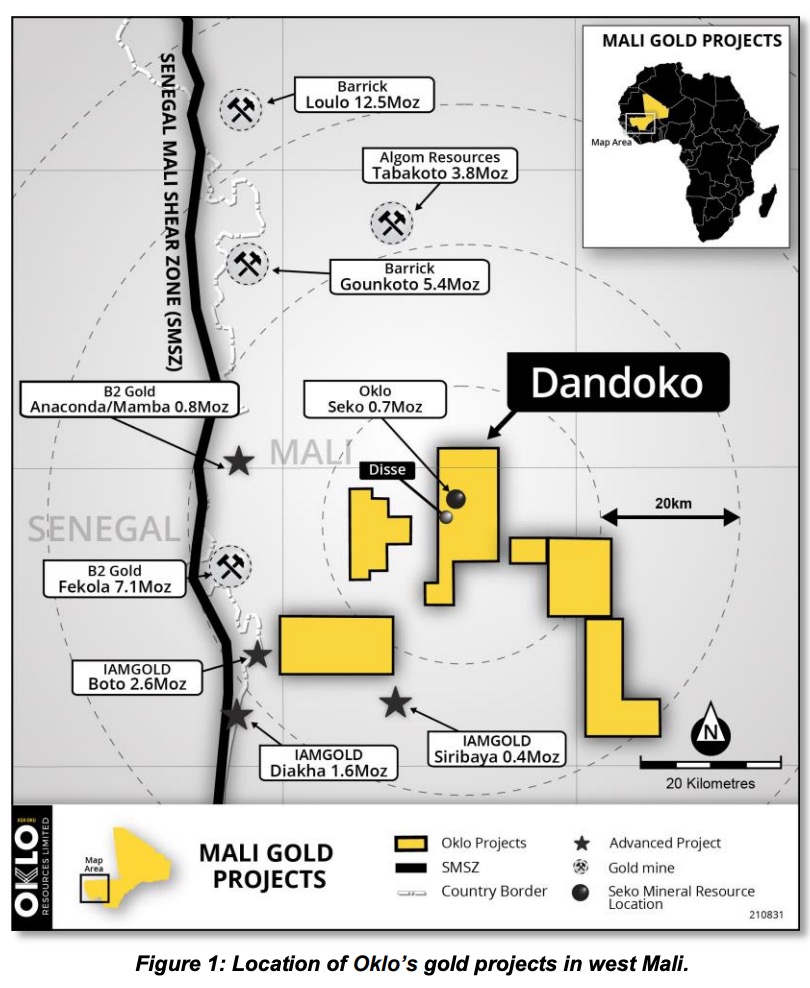 “The addition of high-grade fresh rock will complement the largely shallow oxide resource at Seko.

Since announcing its initial mineral resource estimate in late March 2021, Oklo has remained focused on evaluating resource growth opportunities in close proximity to Seko and other targets along the 15-kilometre Dandoko gold corridor and within its adjoining projects.

Overall, Dandoko’s Disse target represents a small portion of that mineral resource — 12,100 gold ounces — and the prospect currently extends over a 550-metre strike.

During the latest round of drilling at Disse, the explorer intersected:

Ultimately, Oklo believes the results to date add support for potential high-grade shoot development, plunging to the southeast and continuing at depth, that require further drill testing for both their open cut and underground potential.

A resource expansion drilling program across the Seko, Disse and Koko targets has since wrapped up, with final assays expected this month.

In the meantime, drill planning continues to target resource growth opportunities and follow up new discoveries at Dandoko's Sari and Kandiole prospects.

Oklo says technical and scoping studies for the broader project are well advanced, and it’ll continue to keep the market informed of any key developments.

Oklo Resources advances towards resource growth at Dandoko with...

Oklo Resources looks to grow gold base at Dandoko

Oklo Resources Ltd (ASX:OKU)'s Simon Taylor speaks to further encouraging results out of the company's Dandoko gold play in West Mali. The assays prove there's further potential to grow the project's resource base, and Oklo's next phase of drilling will work to add more ounces to the mineral...

Mining Oklo Resources extends high-grade gold at Disse target with hits of up to 53.0 g/t