The company expects a ‘material’ increase in vanadium resources and will also publish a base metals resource.

Technology Metals Australia Ltd (ASX:TMT) (FRA:TN6) is tracking towards producing a definitive feasibility study (DFS) for its flagship Gabanintha Vanadium Project in Western Australia by the December 2019 half-year after receiving all results from a 45-hole drilling program.

The company published its December 2018 quarterly report to the market last week and highlighted it had made significant progress toward completing its feasibility study for what chairman Michael Fry called a “large long-life, low-cost development opportunity.”

WATCH: Technology Metals to have first base metals resource at Gabanintha Vanadium Project

“We’ve reported … our diamond drill results from the Northern Block of tenements and, as expected, it’s really confirmed the continuity of mineralisation.

“Some really good widths and grades coming out of that zone and from the resource upgrade potential.

“It shows our mineralisation does extend a long way at depth below existing resource boundaries.”

The company is working on a resource upgrade for Gabanintha, as it targets December 2019 half-year delivery of its funded DFS.

Prentice said, “All this drilling is now going to be incorporated into our resource upgrade.

“We’re also going to be putting out our first base metals resource following the test work we did and talked about back in December.

“The resource will be all-inclusive now, we’re expecting a good increase in our indicated resource component and we’ll have our maiden base metals resource coming out.”

The company is preparing another batch of test work for market participants, including potential offtake partners and trading groups, after refinement work on a sub-sample delivered a vanadium pentoxide (V2O5) product with a purity of more than 99.7%.

The V2O5 product came from an ammonium metavanadate precipitate that recovered more than 98% of vanadium from a leach solution.

Prentice noted this week, “The high purity that we’re getting, we’ve talked about over 99.999% purity of V2O5, (is) very, very high purity from that product and (end users) want to see that for themselves, do their own test work on it.

“So it’s really key we’re going through … steps to get some of that product out to the marketplace.”

Technology Metals believes the five-nines quality and high purity of its results further confirm the suitability of Gabanintha vanadium product for the speciality chemical, battery and aeronautical industries.

In the company’s December 2018 quarter report, the chairman wrote: “The definitive feasibility study on the large long-life, low-cost Gabanintha Vanadium Project is progressing extremely well with delivery of very compelling metallurgical results, both vanadium product purity and base metal concentrate, confirming the very high quality of this world-class development project.

“The 2018 drilling program results are expected to support a material increase in the global resource for the project and more importantly, the indicated resource estimate.”

A historical timeline for producing the Gabanintha DFS by 2019

In the report, the company noted vanadium prices had stabilised at US$16-17 a pound after a seasonal decline from highs of US$30 a pound, driven by tight supply and demand growth from China’s new Rebar standards.

Technology Metals released results from the third and last batch of assays from Gabinintha last Wednesday.

The latest batch of assays highlights the continuity of high-grade vanadium mineralisation along strike and down-dip at the Northern Block.

Prentice told the market the Northern Block results “further highlight the scope to materially increase the indicated resource component of this globally significant vanadium project, with a flow-on to an expected material increase in the project reserve as part of the rapidly progressing high-quality DFS.”

Technology Metals’ goal with drilling was to infill and extend the Northern Block resource and its estimate in the North and Central pit areas. 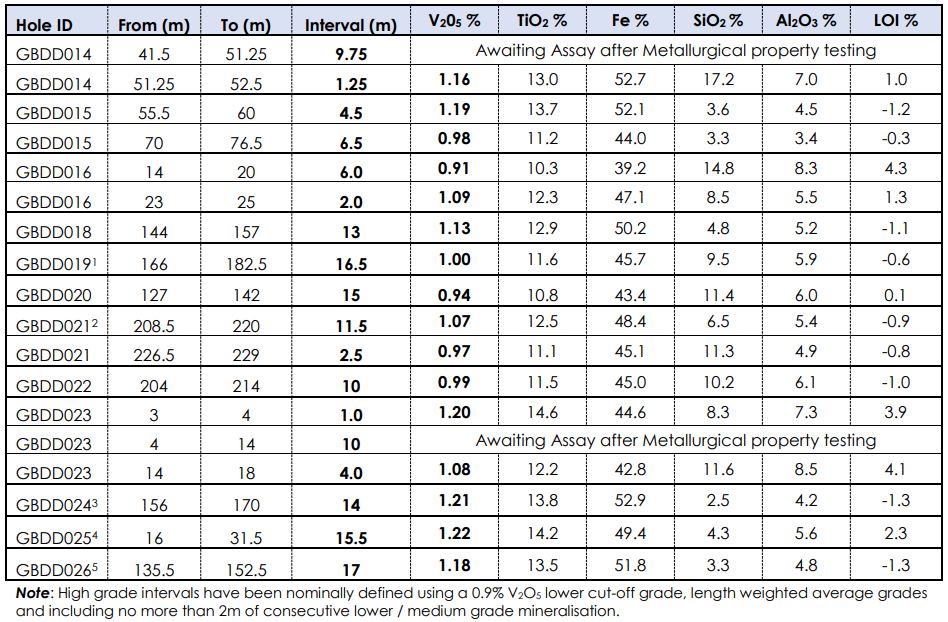 Highlights from the last batch of Gabinintha project results

Drilling has confirmed the consistency of grade and width of the broad zones of basal massive magnetite mineralisation both along strike and down dip.

It extended the mineralisation more than 300 metres south of the Gabinintha Central Pit resource and at vertical depths of up to 190 metres.

The high-grade basal massive magnetite mineralisation is open along the full strike length of North Pit and Central Pit.

The first two batches were reported on in November and December 2018.

Highlights from the first batch of drilling included depth extension intersections of 25-50 metres down dip from 14 metres at 1.17% vanadium and more than 300-metre strike extensions from 16 metres at 1.26% vanadium.

Mineralisation had been found in every Southern Tenement hole. 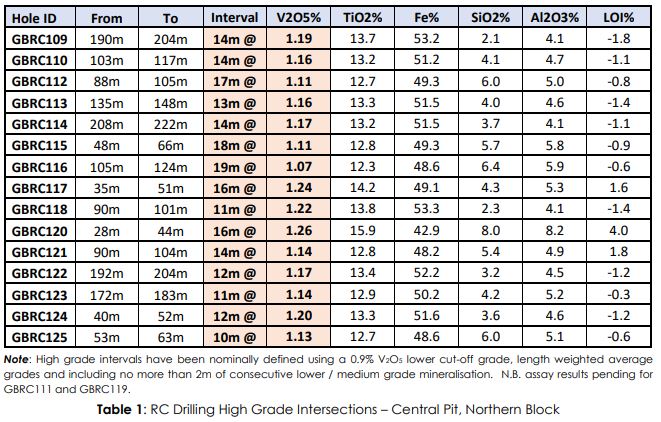 Highlights from the first batch of drilling, from November

An initial depth extension diamond hole in the North Pit returned 13 metres at 1.13% V2O5 from 144 metres. 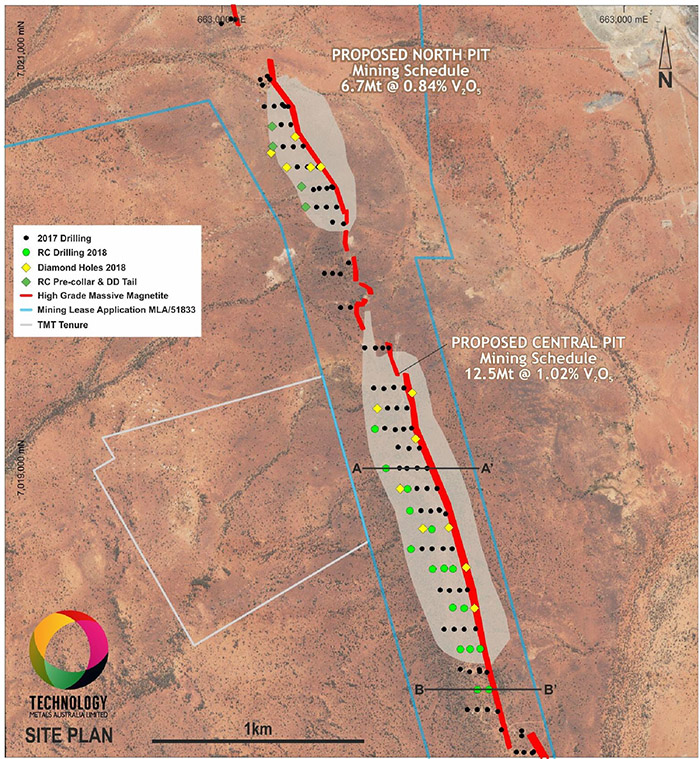 A drill collar location plan for the Northern Block of tenements

Technology Metals released its PFS for Gabanintha project in June 2018, valuing the project at $1.28 billion at a net present value (NPV) calculated at a 10% discount.

The internal rate of return was 55% while the mine life was estimated at 13-years, with a 3.4-year payback.

Prentice spoke to Stocktube at the time about the milestone achievement.

He said, “A lot of engineering and a lot of detailed metallurgical work has gone into the study, and it’s delivered a very technically-strong, financially-robust project." 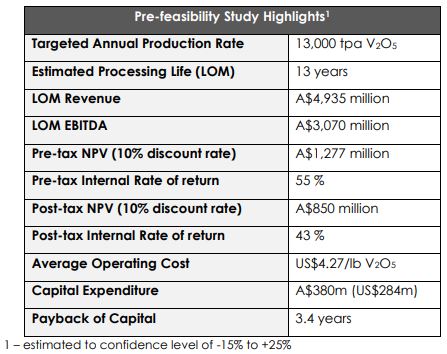 Technology Metals’ latest exploration efforts and DFS has been funded by a $6 million placement to sophisticated and strategic investors completed in October 2018.

Twelve million new shares had been added to those on issue, to put 70.1 million shares in circulation by October 5, 2018.

An earlier oversubscribed placement to institutions and strategic high-net-worth individuals had been completed in March 2018 and raised $3 million.

Technology Metals was admitted to the Australian Securities’ Exchange in December 2016 and joined the Frankfurt Stock Exchange in May 2017.

Technology Metals used $4.4 million on operating activities in the December 2018 quarter, including $4.3 million for exploration and evaluation.

The company had $5.6 million net cash from financing activities to end the period with $3 million and no debt.

Technology Metals is expecting $2.9 million of cash outflows in the March 2019 quarter as it updates its resource statement and works on its DFS.

Technology Metals Australia Ltd (ASX:TMT)'s Ian Prentice gives some background on "industry-leading" roast-leach vanadium recoveries from the company's Yarrabubba Project, part of the Murchison Technology Metals Project (MTMP) in Western Australia. Prentice says this is a crucial step in the...